Things to keep in mind

TAMIA PACK®’s expertise in vacuum packing technology is the result of its rigorous R&D efforts:

The operators of our founding company, ASUR Plant Breeding, had to manage their stock and ensure proper conservation to maintain its commercial value over time. Those of you who work in the seed or grain industry share these same concerns.

In the case of seeds, special attention is paid to germination capacity but also to limiting the development of insect populations. For grain, the focus is more on freshness and pesticide-free insect control.

An in-depth study of the scientific literature revealed a great deal of information on the storage of cereal grains. But that was not enough for us! In our agricultural world, we had to see it and touch it for ourselves. In 2014, ASUR PB’s R&D department decided to conduct tests on large volumes of seeds.

The preliminary results confirmed the importance of the following elements in maintaining a high germination rate:

Stabilization of seed moisture content depends directly on the absence of significant variations in the humidity and temperature of the ambient air. Each level of seed moisture is associated with a unique concentration of water vapor in the air. Seeds react like a sponge to changes in the relative humidity of the storage environment, i.e. they become wetter or dryer in response to fluctuations in moisture levels of the surrounding air. These repeated variations have a negative impact on the germination rate.

With a sense of curiosity, open-mindedness and rigor, ASUR PB researchers then experimented with the main conservation approaches:

It became clear that removing all air (or limited residual oxygen) was the most sensible- and least energy intensive – solution to protect grain from gas exchange. Under these vacuum conditions, seeds and grains are best protected from fluctuations in the external environment and from insect attacks. This requires a moisture-proof, airtight and sufficiently thick container to create an airtight system.

In 2015, our research focused on a heat-sealable pouch composed of several aluminum-based layers providing extremely efficient high-barrier protection to external humidity and oxygen.

COMPARISON OF STORAGE IN AMBIENT AIR AND UNDER VACUUM ON % HUMIDITY 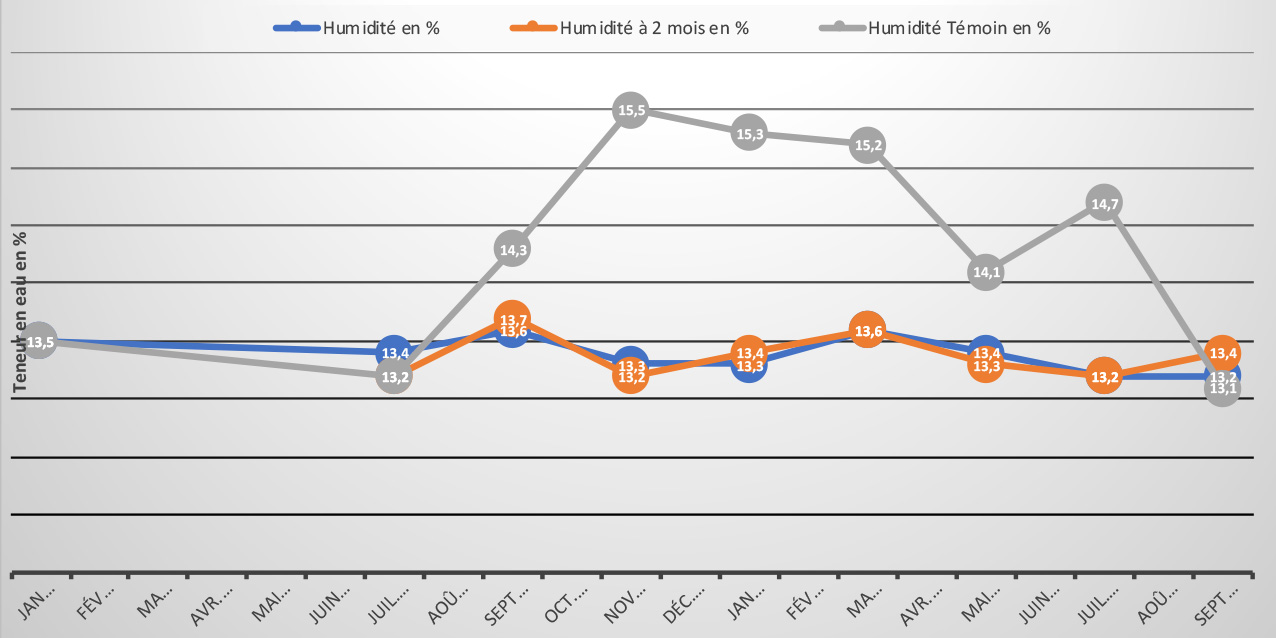 Observation: unprotected seeds take up moisture during the winter period

Once seeds are vacuum-packed, they are no longer subject to variations in the external environment.
Furthermore, the oxygen-depleted atmosphere surrounding them is stabilized as is their moisture content.

Observation: after 15 months, the germination of unprotected seeds decreases

To the delight of farmers, we found that large batches of seed marketed after four years of storage following the SAFET’HY Process were just as vigorous and exhibited the same germination rate as more recent seed.

THE SAHET’HY PROCESS ELIMINATES INSECTS IN 99% OF CASES

The vacuum allows a significant reduction of oxygen: 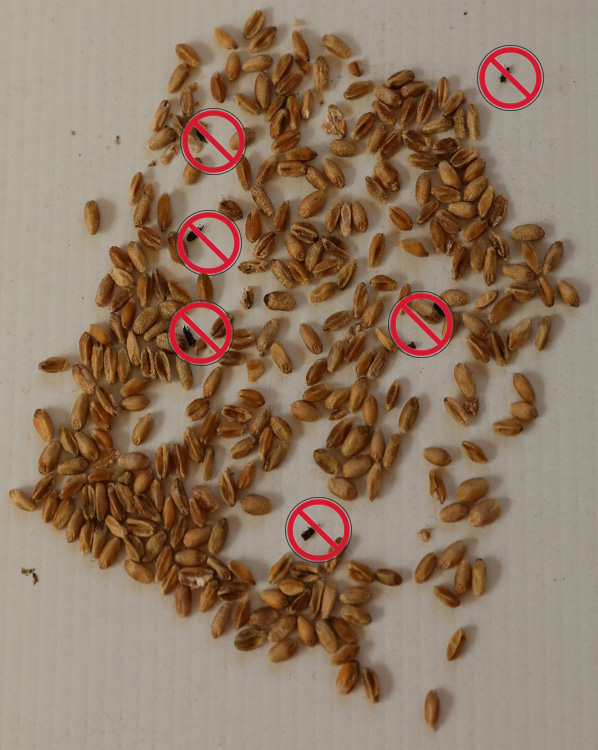 With the global rise in temperatures, increasing pesticide restrictions and the danger that fogging entails, having a solution to deal with insects while preserving germination rate (seeds) and grain quality (food) takes on strategic importance. This is all the more important for the organic and other food products that must be stored or marketed.

Vacuum packing reduces available oxygen therefore suffocating insects and destroying eggs and larvae. But that is not all. Vacuum compression traps adults between heavy inert masses from which they try to free themselves in search of food. Hence, insects that are not crushed die of suffocation or starvation.

During the five years of research and the practical experience of packaging over 15,000 tons of seed and grain (as of February 2021), we have never been bothered by insect infestations or rodents. In terms of the latter, the high barrier vacuum packing stops all gas exchange thus eliminating any sort of odor: no smell, no attack! Even if rodents, often present in storage areas, are generally well controlled, not having to constantly monitor them or apply dangerous chemical treatments would make things easier in terms of safety and financial impact. 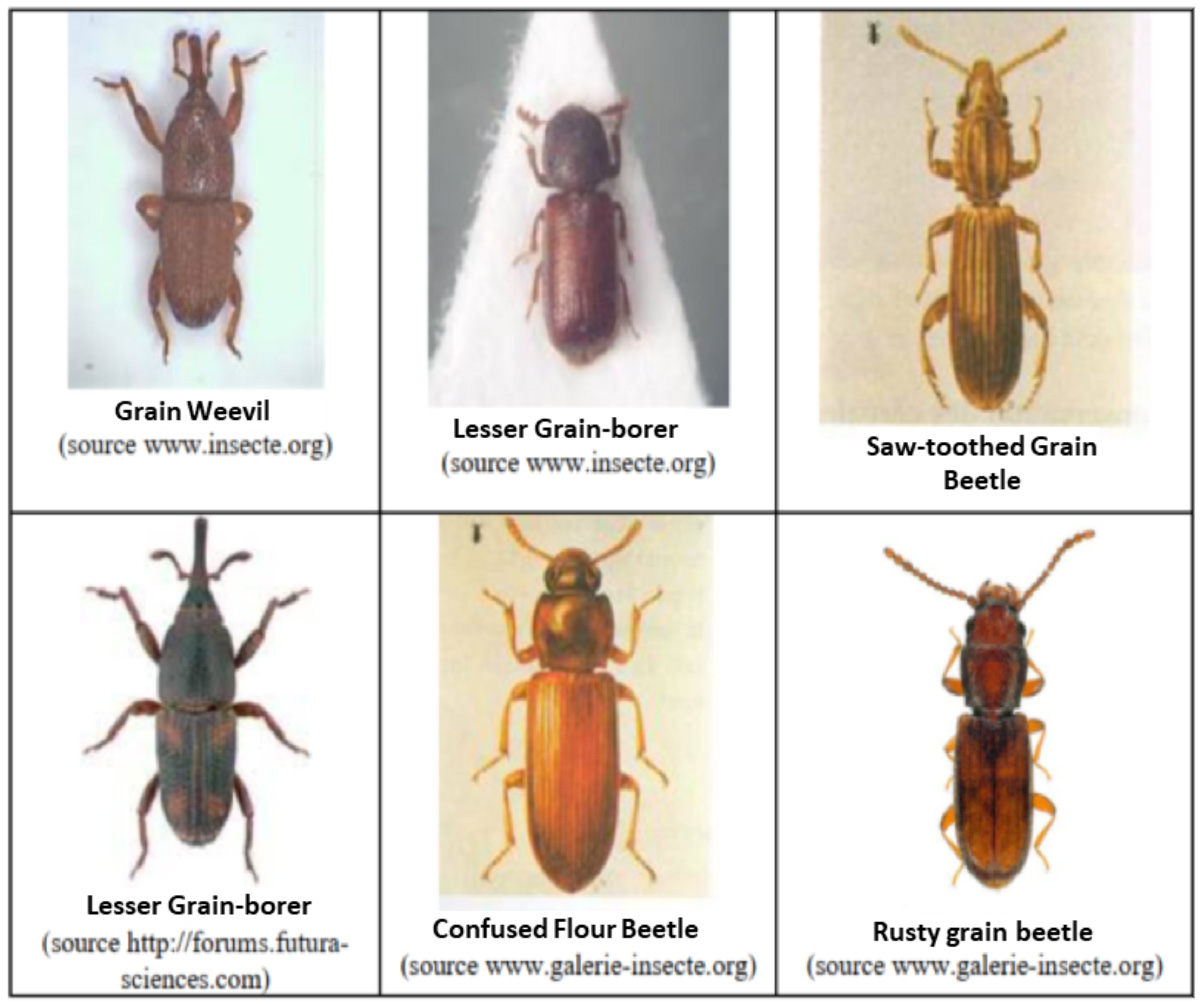 The graph represents this phenomenon: it shows the percentage of living insects over time.
In April we vacuum packed wheat batches heavily infested with weevils using the SAFET’HY Process.

Three months later we opened the bags and found that all the insects had died.

We continued our experiments on the effect that vacuum packing has on several different insect species present in storage areas (grain weevils, rice weevils, lesser grain borers, saw-toothed grain beetles), and even some field pests (bean weevils), and our R&D team found that the insects die within two to four weeks. Indeed, no surviving insect was found in any of the samples taken or small vacuum bags opened.

These results were obtained without injecting inert gas which is not necessary in the vast majority of cases. It is, nevertheless, always possible with the equipment offered by TAMIA PACK, especially when circumstances so require.

Vacuum packing = 0 insects with no pesticides! 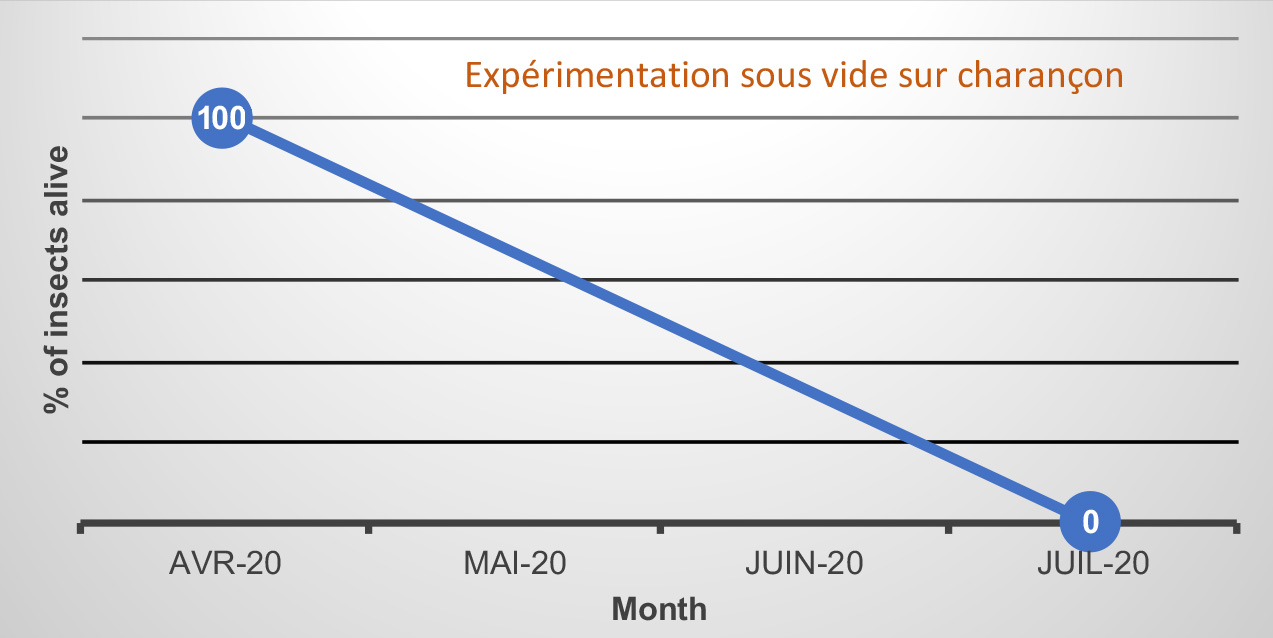 This pesticide-free conservation technology opens the door to new possibilities for the SAFET’HY Process:
a natural fit for the organic, high environmental value, high quality, agrifood, milling and malting industries, to name but a few.